[Fanfiction] to sleep, (perchance) to dream

A/N: Set during the months following Neal’s “death”. Companion of to die, to sleep (Neal’s POV). I suggest you read that first. Title comes from Shakespeare’s Hamlet. 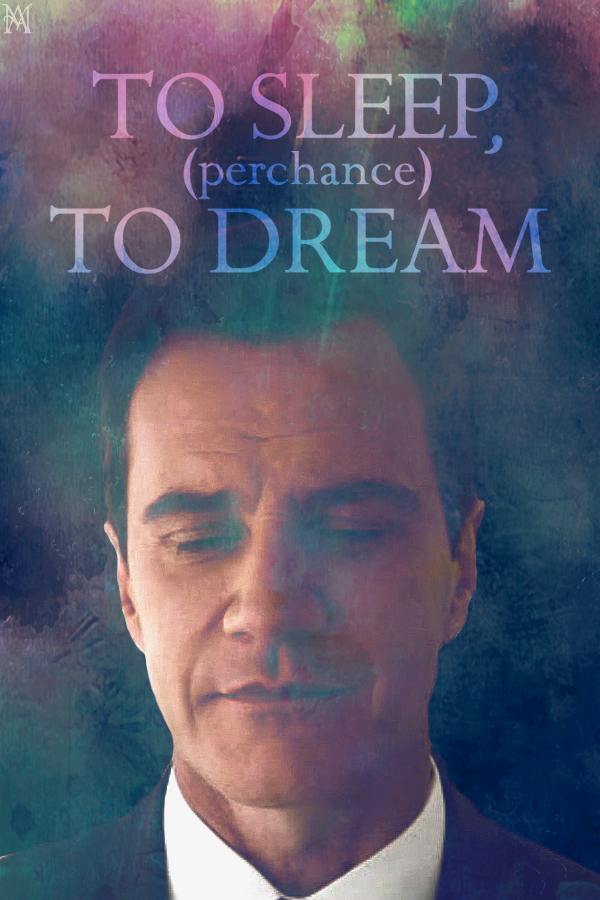 to sleep, (perchance) to dream

Peter dreams of that day for a long, long time. Each night events play out a little differently, but most times the outcome is the same.

The Pink Panthers getting caught, Neal smiling at him (if I let you go, you promise to let me go?), Keller taunting him (if you leave now, there's still time to say goodbye), the terror gripping at his heart while he shot the man who had possibly killed his best friend. And then running to Neal's side (you’re the only one who saw good in me) as he was hoisted into the ambulance (you’re my best friend) and glimpsing the blood-soaked shirt beneath the gauzes. The denial and the fear and then the horrible feeling of his heart shattering as the doctor shook his head (i’m sorry, we did everything we could). Neal's cold, pale, still body in a body bag. Mozzie's — and his own — inability to accept the evidence.

Those dreams have him shooting up in the bed with tears on his cheeks and El's comforting arms around him (you’re okay, you're okay) as he sobs (neal is not). But is he okay? Is it right that, while he sleeps comfortably in his warm bed, Neal will forever be laying six feet under?

(Peter never does get an answer, but he is sure Neal's death was at least partially his fault.)

Sometimes, he dreams of reaching Neal a minute sooner, but still not early enough.

He would find Neal bleeding out on the ground and Keller gone. Neal would look at him and smile weakly (you came) and Peter would try with all his might to staunch the blood flow (stay with me, stay with me). But the younger man would shake his head (sorry, i’m so sorry*) and close his eyes (thank you for everything) and go limp, not yet dead but close, and Peter would have to watch as the EMTs attempted to save him, powerless to do anything to help his best friend. It would still end in a morgue.

Those dreams make him feel almost grateful for how it actually turned out. After all, in reality he at least got the chance to kill Keller, that bastard, and avenge Neal. It makes him feel ashamed of himself — what would Neal think? — but he doesn’t really fault himself for it. Keller killed Neal. He did — he took Neal from his friends, his family, right when the CI was about to get his freedom. Peter usually feels, if not guilt, at least pity for the people he has to kill on his line of work — luckily, not many —, but not for Keller. Not for Neal's murderer.

(Eventually, Peter stops thinking that getting to Neal sooner would have changed things for the better.)

Sometimes, he dreams of getting there too late.

He runs and runs and runs, but when he arrives he is always met by the same sight: paramedics carting away a body covered with a white sheet. He would stop them, flash his badge, and with trembling hands he would lift the cloth — soon dropping it in horror, hands moving to his mouth to stifle a cry. His eyes would meet Neal's lifeless and bloodless face and in that moment he would realize how deeply he failed as handler, agent, and most of all friend.

Waking up covered in sweat, Peter thanks the heavens for having at least let him see Neal one last time.

(Soon, he realizes that maybe that half-goodbye was good enough for him.)

And then there are the other dreams, the ones in which Peter gets there in time.

He would reach Neal and Keller before anything happened and would tell the latter to leave before he changed his mind — they had worked together, after all — and he would clasp his best friend on his shoulder (hey, buddy). Neal would grin widely at him (hey, partner) and then they would both laugh (we did it!) and then Peter would hug the ex-con tightly (you’re a free man!) and invite him to come over at his house. They would have a small party to celebrate the successful op, and everyone would be there — El, June, Diana, Jones, Mozzie, even Sara and Hughes — and they would have a great time. Neal would be free, and he would choose to stay and become a full-time informant, and they would all have a happy ending.

Those are, undoubtedly, the cruelest dreams by far. They show Peter what could have been had he gotten to Neal in time, and they always make him wake up with a smile on his face — which vanishes as soon as reality catches up with him. He gets up, makes breakfast for El and himself, and cries over the coffee (Italian roast, of course).

The moments he has to himself are the only times — aside from the aftermath of a nightmare — when he allows himself to break down and let out his weakness. But he knows he will eventually have to get up from the couch, put Neal's anklet back on the shelf in the living room, dry his tears and start living again.

Even without his best friend, he has a life and a family to take care of. It’s hard and it’s painful, but he has to go on. The guilt will probably never really wash off, but maybe he’s starting to make peace with what happened and with the fact that he couldn't have saved Neal.

Those dreams — sometimes memories and sometimes nightmares — make him suffer more than anything else in his life. But as soul-wrenching as they are, they managed to help him through the third and fourth stages of grief (bargaining and depression) and led him to acceptance, and Peter is grateful for that.

(And then he gets the bottle of Bordeaux, and the small glint of hope he buried comes resurfacing in all its glory, and finally, everything is as it should be. He’s gonna find Neal, once again, and bring him home.)